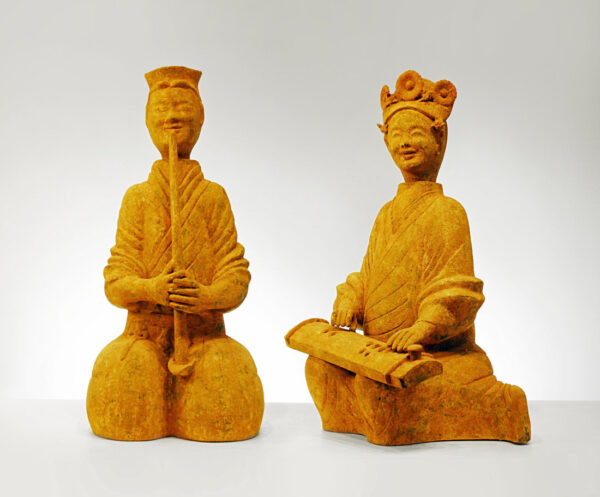 It’s Friday again! On this exciting evening, plenty of people will watch Netflix and HBO. But have you ever wondered how the ancient Chinese spent their leisure time? If we imagine ancient Chinese entertainment, we might get a few hints on antiques.

These are a pair of seated Han musicians. Both smiling joyfully. The male plays the flute while the female plays the traditional Chinese “gu ching”. The details are elaborately carved— even though it has been two thousand years, we can still see the headgear that implies Han fashion, the collars (with the right side crossing under the left) that mark Han ethnic, and the flowing robes that drape up and down similar to the notes streaming out of the instruments.

Chinese ceramic art arose from the East Zhou era (476-221BC), when the territory of the empire was divided by several lords, and reached its peak during the Han dynasty (202-8 BC). These ceramic figurines were used as burial objects to accompany the dead in the underground world. During the regime of Emperor Wu, who emphasized Confucianism, the Han people generally practiced Chinese Parental Respect with grand funerals, thus thrust the ceramic craftsmanship to its summit. The Han ceramic figurines often picture the daily scenario so they reflect the custom of the Han society. In ancient times, only the emperors and the aristocracy could enjoy musical performances; therefore, we can infer that the musician figurines were the funerary objects of the royal court.

The Han craftsmen revealed inner temperaments and dynamic tensions of the ceramic figurines in a plain, romantic style influenced by the Tao philosophy and regional romanticism; so viewers can see the vague expressions and exaggerated proportions on the figurines. It is not the frozen eternity reassembling photographs but the fugitive moment fading away as the memory that the craftsmen tried to capture ebbs. Though the artwork looks like a picture out of focus, it conveys sincere emotions.

From Wikipedia we can learn more about the Han dynasty (Chinese: 漢朝; pinyin: Hàncháo). It was the second imperial dynasty of China and they ruled from 202 BC  to 220 AD, over 400 years. In China’s long history it can feel like a mere blip but considering that the United States is only 244 years old in 2021, we can appreciate how successful the Han emperors were at keeping their empire. Spanning over four centuries, the Han dynasty is considered a golden age in Chinese history, and influenced the identity of the Chinese civilization ever since.[4] Modern China’s majority ethnic group refers to themselves as the “Han people”.

It does not matter what these Han-era musicians were playing— it is the imagination that animates the old statues which bring enlightenment into your life! These are pieces worth collecting. Come to choose one from the Bai Win showroom.

Friendly hint: the early ceramic collection is extremely precious so please contact us for reservations before visiting.

Own a Piece of History

These Han musicians will be a fascinating additions to any well furnished home. Let them entertain you and your descendants for another 400 years. Come and visit our showroom and admire them today.